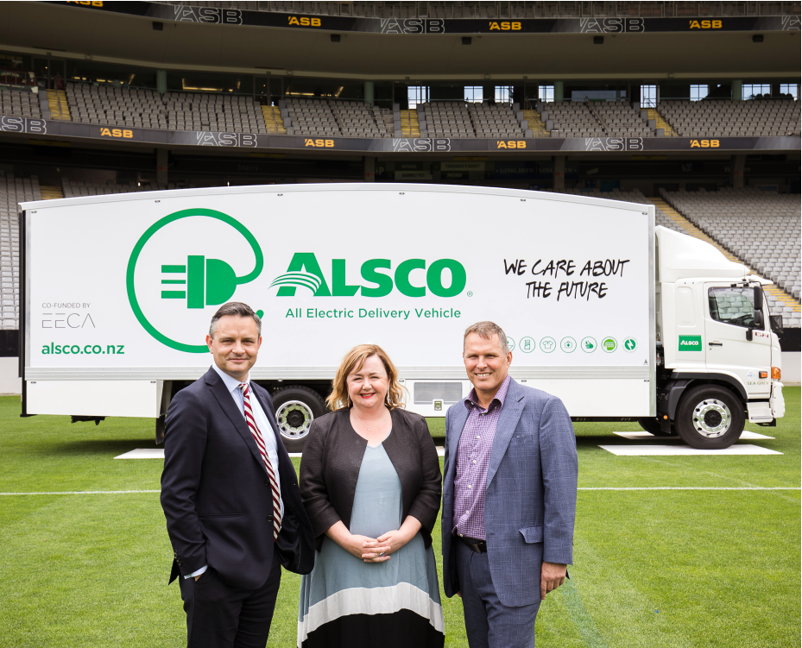 A launch event was held recently at Eden Park for the nation’s first inter-city ‘Heavy EV’. Alsco NZ exhibited what it intends to be the first of many Heavy EV Road Freighters in its fleet.

Attending and speaking at the official unveiling, were Energy and Resources Minister, the Hon Dr Megan Woods, and Minister for Climate Change, the Hon James Shaw.

Minister James Shaw said: “Solving climate change is about creating healthier, more accessible and cleaner towns and cities, as well as cheaper, easier and greener ways of moving goods around. A few weeks ago we passed the Zero Carbon Act through Parliament unopposed. This will require us all to play our part in reducing our carbon emissions. This transition to a more climate constrained world is going to be one of the greatest drivers of innovation I can think of. Today’s launch is a classic example of how solving climate change can drive innovation that benefits us all.”

Significant amongst the findings, presented by Alsco’s New Zealand Group General Manager, Mark Roberts, was a compelling argument that supported the higher investment for a Heavy EV compared to a diesel equivalent, due to a swift payback on operational expense. Roberts stated that operational savings would, in fact, justify the higher capital expense by recouping the additional investment in less than 6 months, thereafter providing a consistent financial advantage over a similarly tasked diesel.

Details of these comparative numbers and how Heavy EV’s can deliver significant financial advantage over diesel equivalents were provided at the launch.

A video presentation revealed the Alsco Heavy EV Road Freighter for the first-time featuring footage of its construction, and on-road testing.

Earlier this year Alsco’s successful application to the Low Emission Vehicles Contestable Fund, administered by the Energy Efficiency and Conservation Authority (EECA) included a selection of a suitable inter-city route from its regions; alterations to the normal coach build, and altered daily operations to support the EV vehicle’s charging requirements.

“We trust the transport industry and wider business will be most interested in the financial viability of our Heavy EV freighter and coupled with significant emission reductions it is a powerful story,” said Roberts.

“By adapting the build, and our operational model slightly, we are looking to demonstrate that the new EV technology is viable for business, and implementation is possible right now. That is potentially a game-changer. It is an exciting step for Alsco, and for the heavy transport industry.”

Also speaking at the event, EECA Chief Executive, Andrew Caseley said, “Alsco’s project is a great example of what EECA’s Low Emission Contestable Fund is for.”

“They’re pushing the boundaries, proving that electric heavy freight is possible, good for profitability, and good for the planet. It’s a compelling case for industry to get onboard, and EECA is delighted to have supported it,” added Caseley.

A further point Alsco affirmed was how wider business could look to better support regions by adopting cleaner and more financially viable transport options. Taupo’s Mayor, David Trewavas, also attended, representing the first of three cities (along with Rotorua and Tauranga) to be included in the first-ever, Heavy EV intercity route.